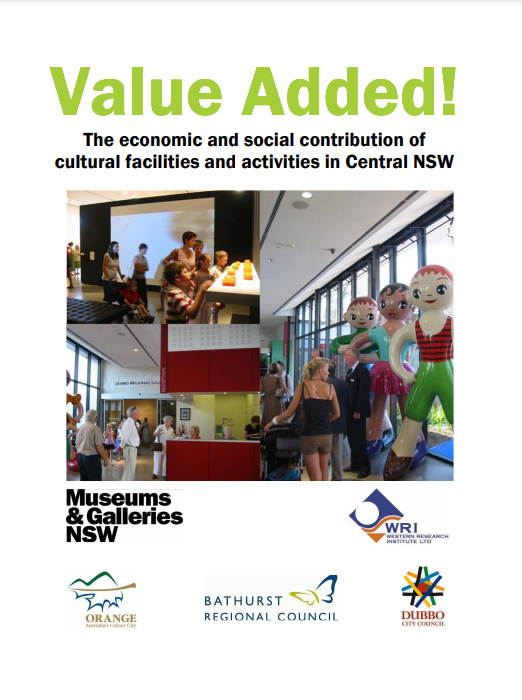 Commissioned by Museums & Galleries NSW, in partnership with Orange City Council, Bathurst Regional Council and Dubbo City Council, the study reveals the positive contribution to local and regional communities and their economies made by the council-operated museums, galleries and performing arts centres.

The study showed that regional arts and cultural facilities create an additional 8.5 jobs for every 10 full time equivalent positions and generates almost $9 million in household income.

It also showed that local government funded facilities provide an economic return on their investment by adding more than $14 million across the region.

The facilities and their related activities, were also found to help residents of the three local government areas to think differently about their world, enhance connection within communities and contribute positively to an individual’s sense of place.

The significant contributions by volunteers working in these institutions were also identified by the study. These 500-plus volunteers generate an additional $1.3 million dollars in economic activity, over half a million dollars of household income and 14 additional full time equivalent jobs across the region.

The research also revealed that across the region households combined are willing to pay over $1.1 million per annum to maintain their cultural facilities and current levels of access and service quality.

The final results of our survey into the economic and operational effects that the shutdown and continued restrictions have exacted on museums, galleries and keeping places in NSW.

The 2021 results of our survey into the economic and operational effects that the shutdown and continued restrictions have exacted on museums, galleries and Aboriginal keeping places in NSW.

The preliminary report for the M&G NSW 2022 Sector Census.

The Audience Research Toolkit, developed by Creative Victoria, is a one stop shop for anyone wanting to understand their market and identify gaps and growth areas.