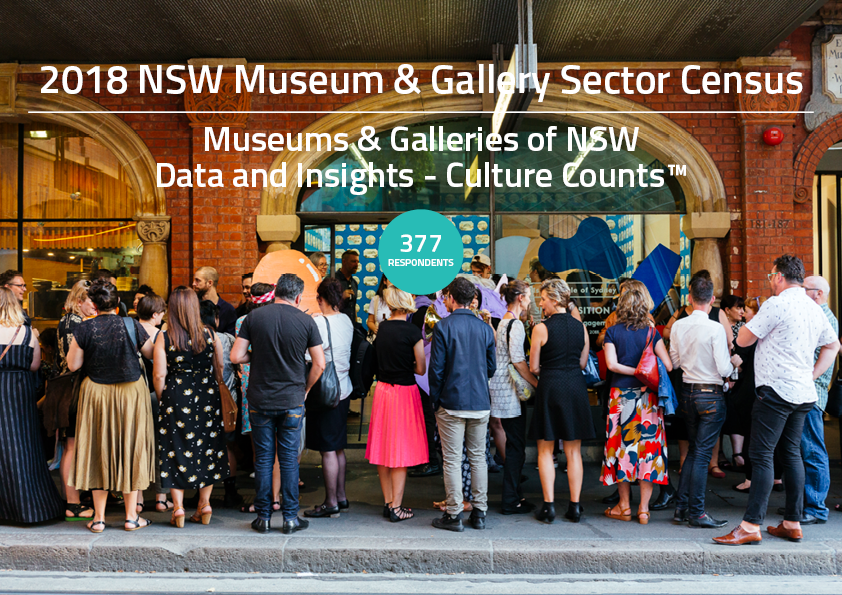 During the latter part of 2018, Museums & Galleries of NSW undertook a comprehensive survey of the sector. It was the third major census of the small-to-medium museum and gallery sector with previous censuses having been undertaken in 2013 and 1999.

Using the M&G NSW contact database as a starting point, the 2018 Sector Census attempted to contact every operational museum, gallery and Aboriginal cultural centre in NSW that have collections and or provide exhibitions, are accessible to the public on a regular basis and operated on a not-for-profit basis.

The overall objective of this study was to gain factual and reliable data for the sector on collections, staffing levels, facilities, funding and visitation. By comparing this data against previous census findings we are able to provide an overview and health check of the sector and build on previous research. It also assists M&G NSW in developing policies, advocacy and directing our future programs and services.
The survey was conducted online and by phone over a 3 month period and received 377 respondents. Approximately two thirds of respondents were from regional NSW.

Some key findings of the census include:

VISITATION
Surveyed organisations reported visitor numbers of more than 5 ½ million in 2017.This included over 3 million visitors across Regional NSW.*
*Regional NSW includes all areas of NSW outside of the greater Sydney Metro area.

STAFF and VOLUNTEERS
Respondent museums and galleries directly support 797 equivalent full time employees.
Over half of all organisations surveyed rely solely on volunteers.
The organisations surveyed reported 8,629 active volunteers giving almost 5 million hours in 2017, worth over $150 million per annum.*
* Figure based on wage rates per hour as detailed in Unpaid Work and the Australian Economy estimates from ABS data, with increases to account for average wage since 2010

The Audience Research Toolkit, developed by Creative Victoria, is a one stop shop for anyone wanting to understand their market and identify gaps and growth areas.

Do you know who's coming to your events and programs - and who isn't? The team at OF/BY/FOR ALL has developed a toolkit to give you a free, simple, step-by-step guide to collecting high-quality participant data. You can use it to create a plan, build a survey, and start collecting data right away.

The final results of our survey into the economic and operational effects that the shutdown and continued restrictions have exacted on museums, galleries and keeping places in NSW.

The 2021 results of our survey into the economic and operational effects that the shutdown and continued restrictions have exacted on museums, galleries and Aboriginal keeping places in NSW.