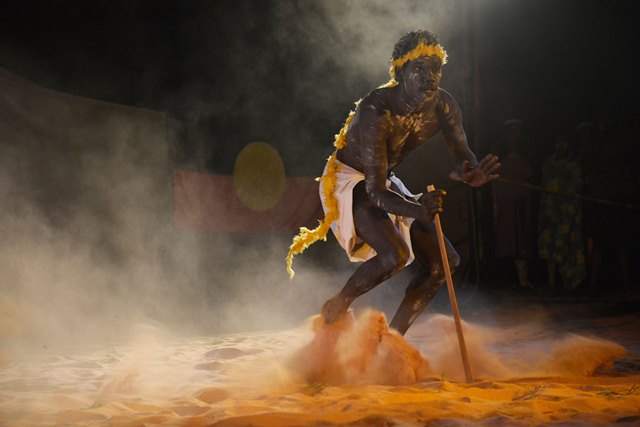 The Chooky Dancers are at the Seymour Centre

See Djuki Mala in action: it's got to be one of the best of the Reconciliation Action!

Reconciliation Week 2014 “Let’s walk the talk” emphasises a practical focus on action rather than idealism.

The theme has a particular focus on turning past conversations about formally recognising Aboriginal and Torres Strait Islander Australians in our Constitution into actions.

Since the first anniversary of the release of the Bringing Them Home report in 1998, 26 May has been set aside as a day of observance for the healing of the stolen generations, their families and communities.

This year’s theme aims to encourage everyone to get involved in the reconciliation journey and create opportunities for people across Australia to have their voices heard.

This year’s theme aims to encourage everyone to get involved in the reconciliation journey and create opportunities for people across Australia to have their voices heard.

The impacts of this are staggering: 25,755 jobs filled in 2013 with 36,371 job commitments for 2014; 544 partnerships between RAP organisations and communities in 2013; $81 million in goods and services purchased from Aboriginal and Torres Strait Islander businesses and $37.8 million in education scholarships for Aboriginal and Torres Strait Islander students.

Reconciliation Australia also commissioned Deloitte Access Economics to undertake an analysis of the impact on the Australian economy. If, by 2031 the gaps in social and economic outcomes between Aboriginal and Torres Strait Islander peoples and other Australians were closed, chiefly around education, life expectancy and employment outcomes, the national economy would grow $24 billion with $10 billion of that coming from regional Australia. Every state and territory would be better off with NSW’s economy growing by $7.4 billion.

It’s a practical outcome which all Australians could share.

Go to reconciliation.org.au to see how your organisation can participate in National Reconciliation Week, register your event on the website and social media using the hashtag #NRW2014.

And while you are at it, why not book to see the Chooky Dancers at the Seymour Centre – it’s a wonderful dance program full of theatre, acrobatics and irreverent humour! As part of Reconciliation Week, the Seymour Centre is also running a great participatory event called ‘I’m not a rascist, but …’, which explores racism and free speech. Bound to be thought-provoking, entertaining and challenging!