Centenary celebration and opening of the exhibition The View from 1919, Tamworth Regional Gallery.

Michael Rolfe at the launch of The view from 1919, Tamworth Regional Gallery.

On Friday 31 May, Tamworth Regional Gallery celebrated the centenary of the Salvana Bequest – a gift of 100 artworks and related ephemera that commenced the gallery’s 100 years of activity. A crowd, estimated at some 200 people, packed the main gallery for official proceedings which included the cutting of a birthday cake by long serving councillor (now retired) Esther Halliday. Arts Minister, Don Harwin was beamed in courtesy of the gallery’s new Regional Cultural Fund provided video link projector, and he was joined by the Art Gallery of NSW Director Michael Brand, who also offered congratulations and acknowledgement of the achievement.

As a former director of the gallery I was pleased to be invited to speak and open the specially curated exhibition, The view from 1919.  A number of other former staff attended, including Sandra McMahon, Andrew Overton and Elizabeth McCallister. It was great to catch up with so many familiar faces, hear stories and recount humorous anecdotes from the past. Kamilaroi custodian Len Waters gave a moving Welcome to Country. In my speech I acknowledged his generosity and, given the event coincided with National Reconciliation Week, reminded everyone that celebrating 100 years of recent history introduces for us an opportunity to consider the relative insignificance of the occasion, when viewed over thousands of years of cultural production and belonging by Kamilaroi people.

Salvana, who was described in a newspaper article from the time as ‘some cute fella’, originally offered his collection to Mudgee (he was born close by). But the then aldermen of Mudgee thought there was a catch and ‘showed no enthusiasm whatsoever’ in accepting the works and Salvana’s conditions – that proper housing, hanging and safeguards against fire be ensured. Tamworth’s aldermen showed and I quote, ‘promptness and interest’, and as they say, the rest is history. I’m not sure if Salavna’s reported cuteness played a part here, but who am I to speculate. 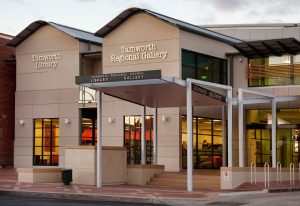