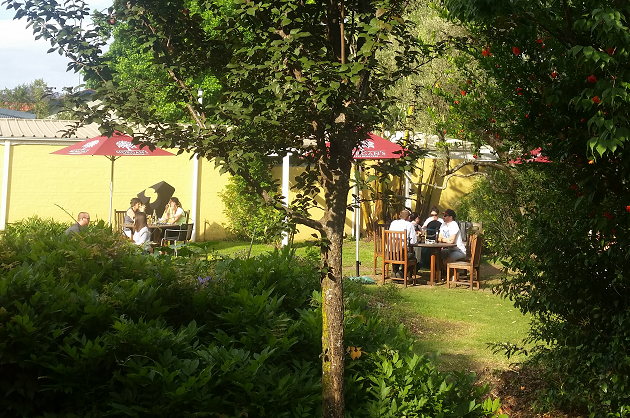 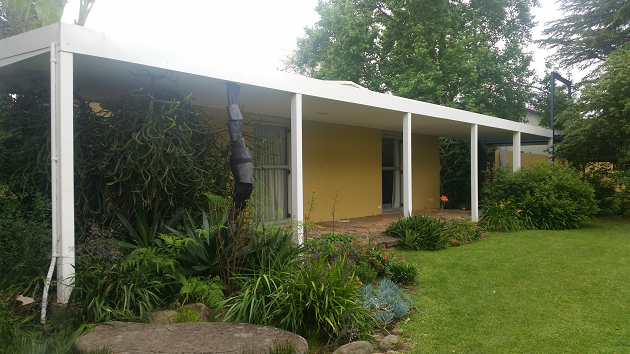 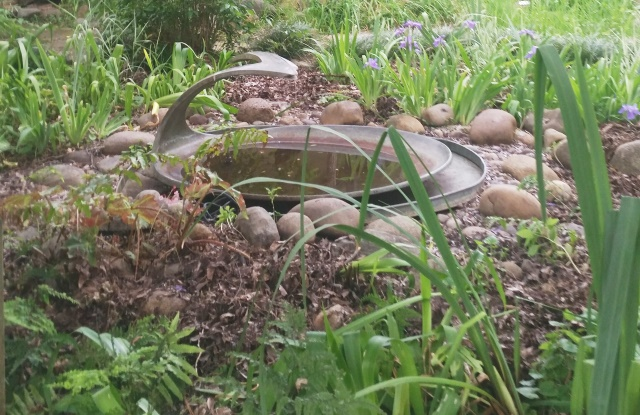 on display in the gardens at Penrith Regional Gallery. 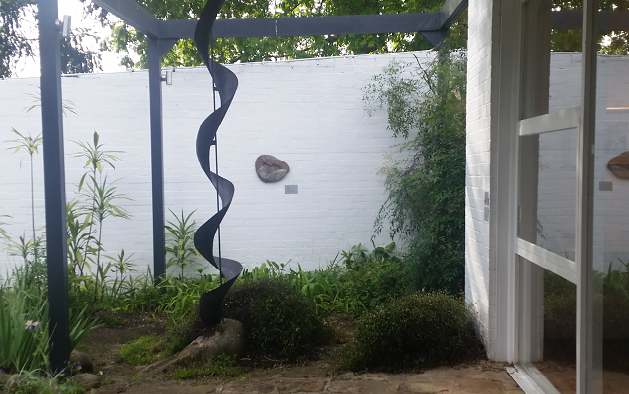 Driving down the Great Western Highway from Penrith over the river to Emu Plains, you could be forgiven for thinking that there’s not much around there except for cars, car yards, service stations and industrial estates filled with shops and more cars. But a narrow left turn through a green park and, in November, under the purple shade of the jacarandas, transports you to another, serener world of gardens and art on the banks of the Nepean River.

As I walked down the tiled pathway to the entrance of the Penrith Regional Gallery & The Lewers Bequest, I caught glimpses of umbrellas scattered in a lush garden courtyard, towered over by a green-draped water tank on a high timber platform and I could hear the faint strains of a guitar or two. Along the way, I discovered artfully placed sculptures in sunny corners of the garden, and the transition from older homestead to its Modernist sensibility was evident as the gallery is made up of a series of interlocking buildings and covered walkways interwoven with a lavish garden.

I wasn’t expecting to make contact with staff there, as I’d come rather late after the mundane duty of picking up my car from one of those ubiquitous Penrith caryards, but I was pleasantly surprised to be taken on a short tour by a young visitor interpretation officer of the latest installation just before it closed. Hot House is a set of four sensory pieces that take up the four rooms of the c1905 Lewers House—each room with an installation by a single artist, against the backdrop of the garden glimpses through the windows.

All the senses were evoked—movement and touch, sound, scent, vision and taste—the last somewhat vicariously, through the confronting video installation of the artist Salote Tawale, eating while wearing the ominous makeup of the Mexican Day of the Dead. David Haines took the garden as a cue, with his subtle installation of scent wafting through an otherwise almost bare room, the word Violet giving a clue as to the origins of the scent. Tully Arnot’s movement-sensitive installation of artificial plants responded to you as you walked around, while the fourth room contained plants from the garden set in resin by the artist Genevieve Lown with accompanying instructions to touch them. The overall effect of the charming old house with its stark white painted interior and the minimalist but strong installations was very striking.

More people drifted in, evidently coming from work, meeting friends and family, and the atmosphere was relaxed as the warm evening settled around us.

However, it was now 5pm, and the garden, the guitars and the other galleries beckoned.

The garden contains original pieces by Gerald Lewers and other artists—serene sculptures that melt into the subtropical topography, with small trickling streams and subtle ferny ponds completing the effect. It’s easy to see how artists would find this location a perfect retreat to contemplate and create—and to have it now as a regional gallery is a perfect way to acknowledge and extend its past.

Drifting into the large courtyard and then into the main exhibition space, I encountered Tracy Deep’s intricately woven pieces in Desert Song. These sculptures, at first glance suggest natural forms such as leaf skeletons, the bleached bones of animals and the spiky symmetry of sea creatures. Closer inspection revealed they are made out of found objects: one skeletal form was made from the underwire from women’s bras, another a hanging jellyfish-like shape from twisted wire and rusted tin, while others incorporated seedpods and material from nature. The beauty of the forms belies their ‘discarded’ materials—but by taking this waste and transforming it, the artist comments that nothing is completely useless:  that art itself has utility, the faculty of transformation, and of making us stop and wonder.

After all this contemplation, I needed some sustenance, so I joined the growing crowd at the outdoor tables, enjoying a young guitar duo over a beer and a tasty dip platter. More people drifted in, evidently coming from work, meeting friends and family, and the atmosphere was relaxed as the warm evening settled around us. This regular Friday evening event, Sips and Sounds will be running over the entire lazy summer and is a lovely way for locals and out-of-towners to engage with the gallery while unwinding from their week. The sun seemed to be sinking more slowly than usual, as though reluctant to leave this perfect scene…

Ondine (aka Mountains Muser) is an online producer with over twenty years’ experience working in the museums sector. Now living in the Blue Mountains, she gets to ponder her twin passions—art and science—while staring out the train window to and from the big smoke.