While recently visiting the South Coast to discuss a proposed regional collection digitisation project, we visited our hosts the Merimbula Old School Museum and spoke to their President, Don Bretherton and Curator, Liz Bretherton from the Merimbula-Imlay Historical Society.

The Merimbula Old School Museum is a heritage-listed stone building dating from 1873.

The collection consists of objects and photographs that combine to tell the stories of Merimbula, Pambula and the surrounding area. Various local industries are represented such as dairying, goldmining, oyster farming, fishing and forestry.

The most significant objects on display are a writing desk once belonging to Syms Covington, who was Darwin’s assistant on The Beagle who settled in Pambula, an ambrotype of four mutineers from the American whaling ship, Junior, and medals awarded to the Maizena cornflour mill.

Merimbula began as grazing land for the Imlay brothers and was later developed by the Munn family whose wealth was created around the Maizena cornflour mill. Merimbula became significant as a port when steamships travelled down the coast from Sydney.

The museum is managed by the Merimbula-Imlay Historical Society. 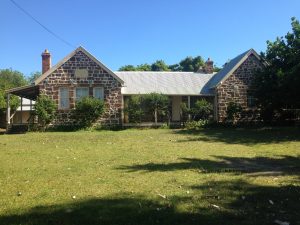