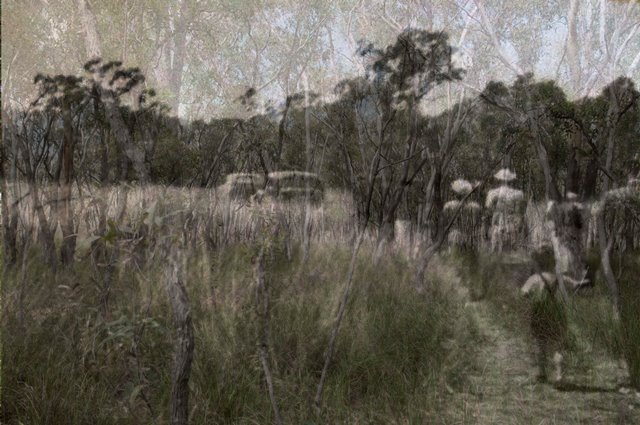 Back to Burra Bee Dee 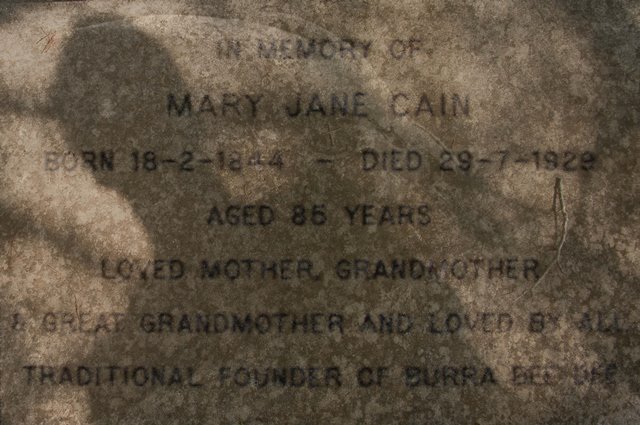 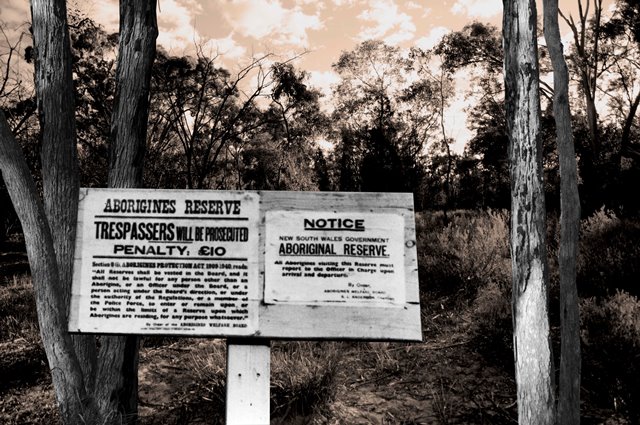 The work tells the story of his mother’s Home country in the Coonabarabran area and presents photos which visually hover between documented truth and experienced reality. It evokes enquiry and curiosity in the viewer.

M&G caught up with Warwick to find out more.

M&G: First up Warwick, tell us about Mary Jane Cain?

WK: Mary Jane Cain is my great, great grandmother. In the 1890’s she wrote to Queen Victoria’s representative in Australia, the Governor of NSW asking for some land to be given back to the Aboriginal people of the Coonabarabran (North-western) NSW) area, so that they could get on with their own lives and become independent and self sustaining. As a result of my great, great grandmother’s persistence in advocating for the rights of her people the Governor bequeathed a total of 600 acres to Mary Jane with the proviso that it be shared and utilised for the good of the entire Aboriginal community.

Mary Jane Cain is regarded as being the original founder of Burra Bee Dee and her name is held in high esteem in the history of the wider Coonabarabran community. Mary Jane was a Land Rights activist and a very formidable woman who had the tenacity and gumption to be able to stand up for her people in the name of creating a more just and equitable lifestyle for the entire Indigenous community, of her time.

M&G: It’s a remarkable story on many counts. Is it considered an important piece of history within the Gomeroi and Weilwan peoples’ history or is it one that was more recently ‘unearthed’ somehow?

WK: The story of Mary Jane Cain and the ‘parcel of land’ known as Burra Bee Dee is largely unknown outside the immediate community of Coonabarabran. In 1994 Dr Margaret Somerville consulted with four women from Coonabarabran and together they wrote a book titled ‘The Sundancin’ which portrays the very same subject matter I have covered within my photographic exhibition.

Mary Jane Cain and the story of Burra Bee Dee is indeed a very remarkable story and I feel that it is a story that needs to be shared on a wider basis so that more Australians can gain a better insight about the lives of Aboriginal people and the determination that a lot of our ancestors showed to initially take on the Government and ask for better rights for a downtrodden culture.

I have come to ‘know’ my people more intimately and have gained a deeper respect for the lives they had to endure.

M&G: How has researching for this body of work changed your personal relationship with Burra Bee Dee?

WK: I have been able to form a better understanding of my own ancestry and the history of Burra Bee Dee through my commitment to this project. I have come to ‘know’ my people more intimately and have gained a deeper respect for the lives they had to endure. They are a strong people and they are a very proud people.

I have always had issues as far as being in touch with my own Aboriginality, however through the process of developing and creating this body of work, I have somehow been able to reinforce my own identity as an Aboriginal man and I am more readily able to accept my Indigenous origins and feel strong within myself about that.

M&G: You work with historical photos of your people and their land. Where did you find the original images and can you describe how you reworked them?

WK: The old images that I have utilised and merged with my own contemporary landscape photographs were passed onto me through my Aunty Margaret Robinson and my second cousin Ms Paris Norton, who both live in Coonabarabran. The old photographs were originally given to my Uncle Bill Robinson by Mrs Barrington, the wife of the last Reserve manager at Burra Bee Dee. The images were handed over to my uncle to do whatever he wished to do with them to assist in developing Burra Bee Dee as an historical and cultural site of significance. My work, if you like, has become an extension of this concept as it goes on to tell the story to an even wider viewing audience.

M&G: What are the central themes in your art practice and is there a direct relationship with particular materials and techniques used to address those themes?

WK: The central theme of my arts practice over the last 20 years or so has centred on my own issues concerning my Aboriginality. As a young child I was not proud to acknowledge my Indigenous ancestry and yet through my ongoing commitment and practice as an artist I have been given the necessary tools to investigate and explore these issues so that I can now stand tall and strong and accept myself for the person that I am. I am indeed a fortunate man to have been given the skills to produce the art that I do and to utilise it in a way that strengthens and reaffirms my existence as an individual and as an artist.

Creating artworks that reflect the truth of your own existence and life experiences is the artwork that people most relate to, as it both informs and raises further questions about the artist and the work itself. I also like the idea of creating and instilling some form of emotional connection and or feeling through the viewing of my art.

M&G: In 2013 you won the COFA Aboriginal Arts Residency Award in the Parliament of NSW Aboriginal Art Prize, is the Burra Bee Dee as result of that residency?

WK: In short, yes. However at the commencement of my residency I didn’t know that I would be exhibiting the body of work that I have now created. I had a more generalised concept of taking landscape photographs (not necessarily of Burra Bee Dee) and secreting within these black and white landscapes, images of Aboriginal people looking after and watching out over their ‘country’. As my project progressed it became more personalised and all of a sudden it metamorphosed into an account of my own personal history, my ancestors and this place called Burra Bee Dee.

I feel that I have only really touched the ‘tip of the iceberg’ as far as my research and investigation is concerned and as time moved on towards the finalisation of my project I had to begin to pull together what material I had developed and accrued over the six month period so that I could prepare for the final exhibition.

Thanks Warwick for talking with us today. We’d love to catch up with you again next year.