Minister for the Arts Don Harwin has announced the six international-Australian architect teams shortlisted to develop designs for the new Powerhouse Precinct at Parramatta.

“Having attracted 74 expressions of interest involving a staggering 529 individual firms from 20 countries, the level of global interest we received has more than justified our excitement in moving forward with this Western Sydney project,” Mr Harwin said.

“We are moving forward with this major project for Western Sydney and the museum at Ultimo will close in 2020 to ensure the safe removal and transfer of the collection before the new museum’s scheduled opening in 2023.”

The finalist international-Australian and Australian teams are (in alphabetical order):

I am particularly thrilled to see our finalist teams include Australian lead firms, collaborations between emerging and seasoned practices and between Australian and international talent who have been inspired by the opportunity this bold and exciting project offers,” Mr Harwin said.

The six finalists will now attend a site visit in June 2019 and will have three months to develop their concept designs, which will be shown to the public in a physical exhibition and online gallery before the international jury meets.

“This major investment by the NSW Government will enrich the cultural lives of people in Western Sydney, boost the local economy, create jobs and draw visitors from Australia and world-wide,” Mr Harwin said.

Member for Parramatta Dr Geoff Lee said some of the world’s best design teams will compete to design an iconic museum on the banks of the Parramatta River.

“This will be a museum that people in Parramatta will be proud of,” Mr Lee said.

Each finalist team will now receive an honorarium of $150,000 to develop design concepts, with a winner set to be announced late 2019.

Shortlist bios are available at new.maas.museum 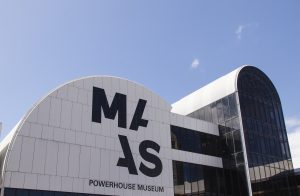