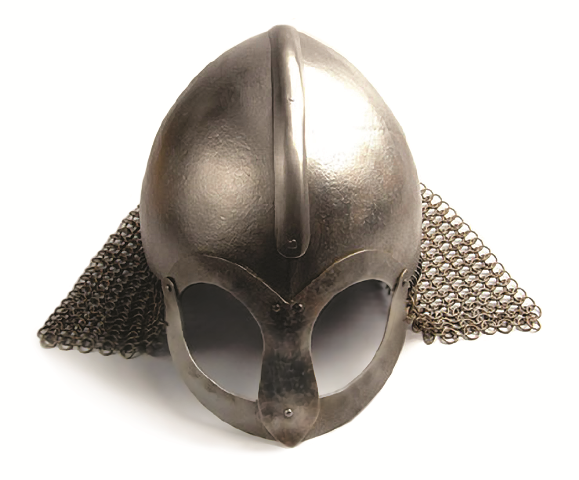 The only example of a complete Viking-age helmet in existence, this is a replica of the Gjermundbu helmet from the 10th century, named after the farm from which it was excavated at Ringerike in central Norway.

The Vikings were plundering invaders with horned helmets, right?  Popular culture paints an unmistakable picture – big and burly with attitude, Vikings roved across oceans in boats, pleased to pillage and plunder and return to their icebound homeland with the bounty.

A visit to Vikings: Beyond the Legend may just disarm you of that idea.

Here history’s infamous villains are on their best behaviour. We meet Vikings you’d be happy to introduce to your Nan; ‘Erik the Great’ transformed into Mr Niceguy with family, friends and everyday concerns.

The exhibition is cleverly assembled; part scientific recreation and myth-busting exercise, part careful and methodical collection and research. Showing off their cultural credibility, a three-dimensional world of Viking domestic life is revealed using 500-or-so objects on loan from the Swedish History Museum in Stockholm.

Here history’s infamous villains are on their best behaviour. We meet Vikings you'd be happy to introduce to your Nan; 'Erik the Great' transformed into Mr Niceguy with family, friends and everyday concerns.

Life in their Scandinavian homeland is illustrated by personal objects – finely wrought jewellery, fragments of clothing, cooking and farming tools and religious ephemera. It’s not hard to relate to the Norsemen who owned the various keys on display; safeguarding family and farm, protecting property and livestock.

These personal items on display in Vikings: Beyond the Legend play a powerful role in humanising the Vikings, a perspective underscored by the display of human remains in the exhibition. These bones studied by scientists to assess health and the medical care available at the time, silently disclose how diet, illness, labor and injury affected them.

The pièce de résistance is the incredible remains of a Viking ship; equally at home in a contemporary art gallery as much as a museum setting. The ship, found within a burial site, is survived only by its nails–each one hung by transparent wire in the form of the ship’s hull. Demonstrating not only the physicality of the ship, the display evokes the craft, construction skill and seafaring talents of these hardy folk. Three replica ships dotted throughout the exhibition neatly complement the transparent one, supplying ample fodder for filling in the gaps.

In keeping with the myth busting promise of the exhibition there is only one example of an intact, sadly ‘horn-less’ Viking helmet. It appears as though the suped up, alpha-male horned helmets of Thor, Beowulf and Hagar the Horrible are without archaeological evidence.

Don’t despair however, the show still has plenty of weaponry and treasure – you can even lift a replica sword just like any Ragnar, Ingibjörg or Sven would have used.

Previous PostLloyd Rees: Works from the South Coast
Next PostNewcastle Museum celebrating all walks of … life? 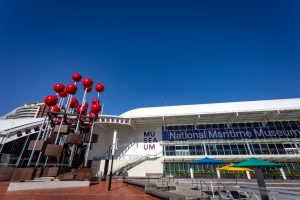