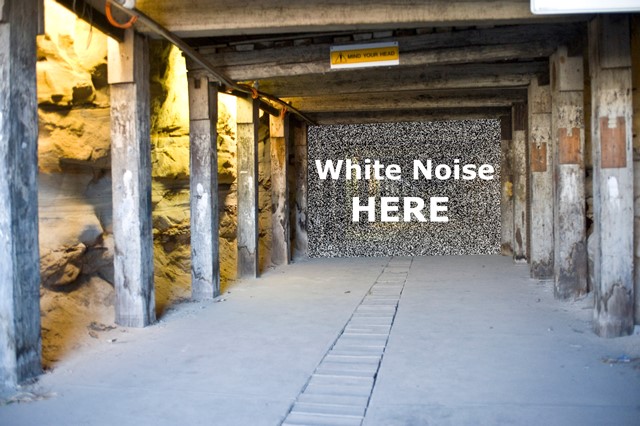 To be shown as part of Underbelly Arts Festival, Cockatoo Island, 1-2 August 2015.

Next Monday, ArtChat: Art + Space, kicks off at Freda’s Bar and Canteen in Chippendale, featuring artists and arts leaders talking on the topic of space and how it relates to contemporary art practice.

The diverse list of speakers for ArtChat includes Amala Groom and Nicole Monks who are creating a collaborative project for the 2015 Underbelly Arts Festival on Cockatoo Island – a weekend of visual art, performance, theatre, live art, music, sound and dance with a focus on space, process and emerging voices.

For this year’s Underbelly Festival which runs from 1-2 August, Groom and Monks present White Noise, a site-specific multimedia project that will transform the Island’s Dogleg Tunnel. Utilising sound collected from everyday life and natural objects found on the Island, White Noise creates an immersive environment of light and sound, symbolising a cultural and political portal between two worlds. Informed by de-colonising processes, White Noise explores the intersection of Aboriginal and colonial worldviews, using the aural and the sensory to create a transformative experience.

Both artists are interested in inserting Aboriginal voices and perspectives into mainstream discussions of art through experimental, interactive and performative approaches. They are also concerned with transforming space by developing site-specific works which alter movement through public spaces which makes them ideal contributors to ArtChat.

Both artists are interested in inserting Aboriginal voices and perspectives into mainstream discussions of art through experimental, interactive and performative approaches.

Groom’s practice is informed by Indigenous methodologies and is a social and political commentary on contemporary politics and race relations. Currently studying Fine Arts at UNSW Art & Design, Groom’s recent exhibitions include Bungaree’s Farm at Mosman Art Gallery, (in)visible: the First Peoples and War at Lake Macquarie City Art Gallery and Mass Group Incident: Tell Me My Truth at 4A Centre for Contemporary Asian Art.

Monks is a creative practitioner in visual art, interior and surface design. Since 2011 she has exhibited at Boomalli Aboriginal Art Co-operative, and her first international exhibition was held at the Tokyo Metropolitan Art Museum. In 2014 Monks won the Fisher Ghost Photography award, a Sydney Design Award and was Highly Commended at the Parliament of NSW Aboriginal Art Prize. Recently Monks won the 2015 Drift Installation Art Award in Mandurah, WA.

Make sure you don’t miss out on hearing about White Noise – reserve your spot at Freda’s on Monday 13 July via Eventbrite.

ArtChat is presented in partnership with Regional and Public Galleries of NSW.