To commemorate the centenary of WW1 and the raising of the 1st Light Horse (AIF) from the ranks of the NSW Lancers, the NSW Lancers Memorial Museum of the 1st/15th Royal NSW Lancers together with Parramatta City Council is mounting a historical Pageant along Macquarie Street, Parramatta.

Drawing extensively on period uniforms, equipment & vehicles from the Museum’s heritage listed collection, the Pageant will trace the history of one of Australia’s oldest and most decorated Regiments, from its foundation in 1885 as Australia’s only Regiment of Lancers, through it’s time as a Tank Regiment.

M&G NSW visited the Lancers Museums to see how preparations were going and discovered how strong the volunteer spirit is after 129 years. In this video, Ian Hawthorn explains the importance of the Pageant, the significance of the Governor General attending, and the story behind Ace, a Matilda tank that will be taking pride of place in the Pageant come hell or high water. 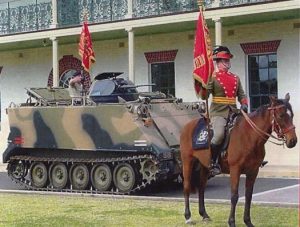