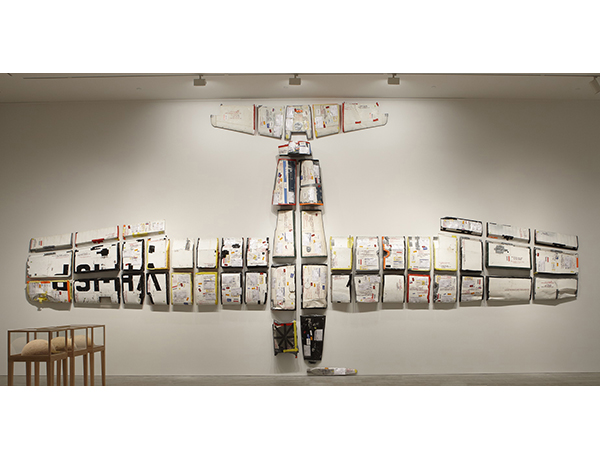 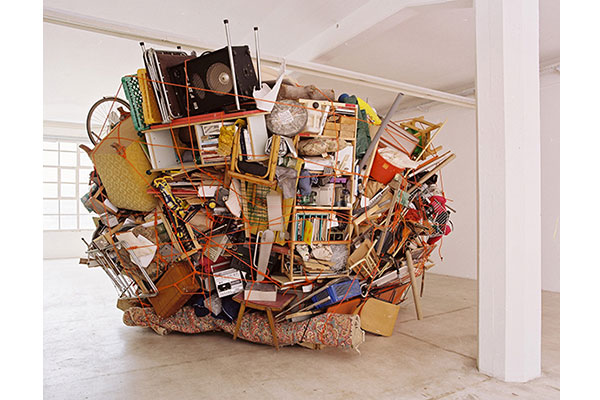 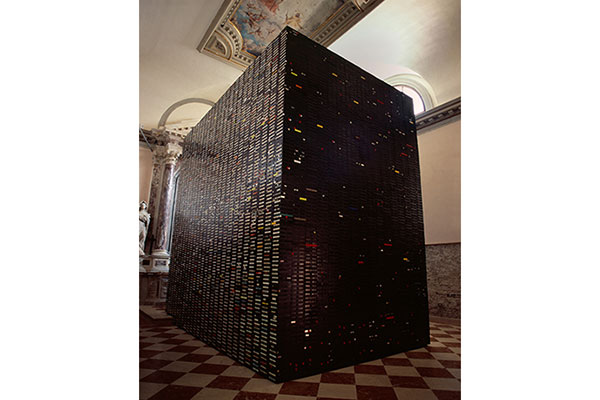 Lifespan, 2009 , 175, 218 VHS video cassettes are arranged to form a solid block in the deconsecrated chapel of a former nunnery. Curated by Felicity Fenner, for the 53rd Venice Biennale. 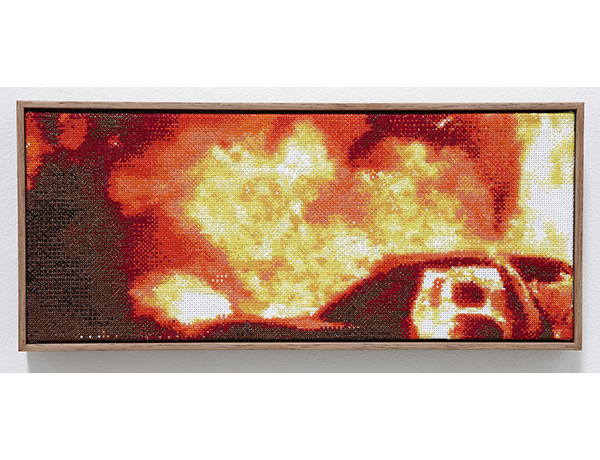 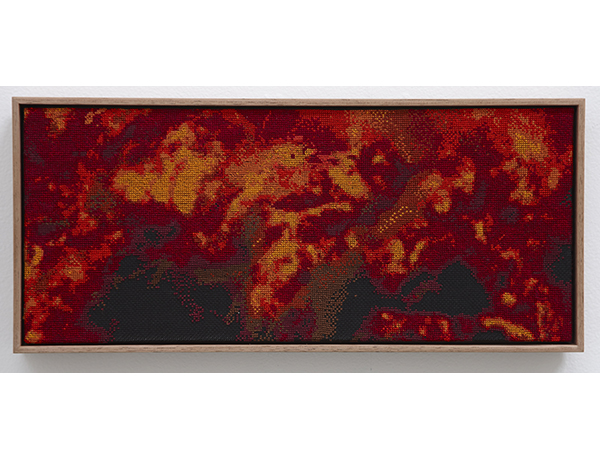 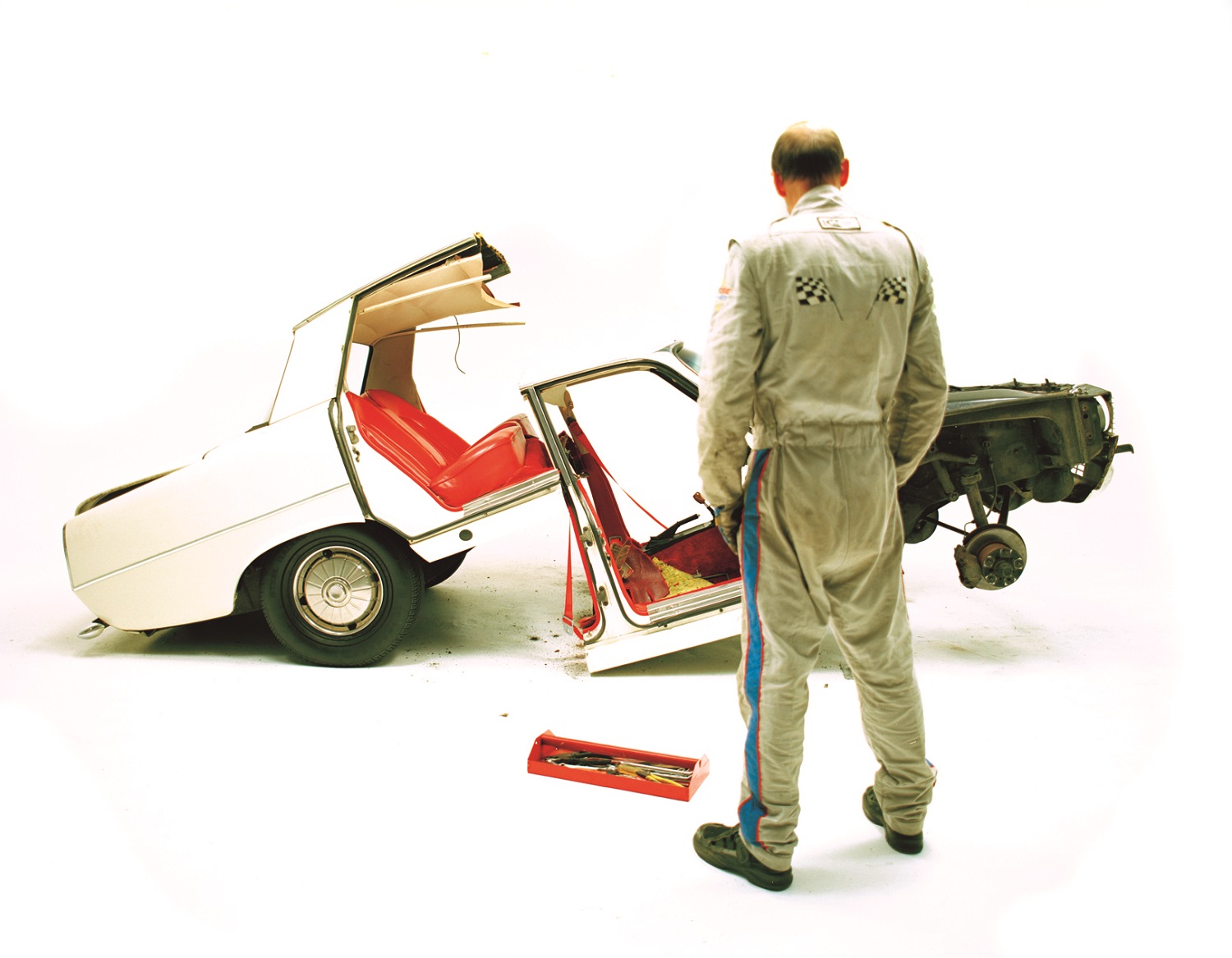 SHOWCASE highlights the work of contemporary artists and curators we work with and whose work you will see in museums and galleries across NSW and beyond in the near future.

Claire Healy and Sean Cordeiro are best known for their dramatic and playful transformations of everyday objects—a house, caravan or the entire contents of a room—into a work of art. They have been steadily building their international career since a major survey at the Museum of Contemporary Art, Australia in 2012.

The collaborative duo’s first ever moving image work, The Drag, features in People Like Us, currently on show at UNSW Galleries and touring nationally from 2016.

People Like Us brings together recent work by 12 Australian and international artists and artist groups working in film, animation, digital and interactive art. The exhibition captures universal aspects of the contemporary human condition and reveals the many experimental technologies being deployed by artists as they comment on issues confronting us in the 21st century.

For more information on the exhibition and tour please visit NETS.

RA: People Like Us features your first foray into moving image technology, The Drag. Why did you decide to take your work in this direction?

In a way, The Drag is a return to the way we used to create work in the early noughties. Our first works that we made together were processed based works that continued to exist as photographic documentation. We decided to use video technology to document the process involved in The Drag in order to create a 1:1 scale representation of the procedure. Our decision to use two-channel video as a way to document the processes the car underwent was also made to create a definite physical start and finish point delineated by the positioning of the two screens.

We have often been asked to re-exhibit older works, which have become ephemeral since it was not possible to house them due to their scale. This has been the case for The Cordial Home Project (2003), and Deceased Estate (2004): it’s a very difficult thing to hold onto an entire home, or the entire contents of an artist’s’ warehouse space. It is a comforting thought (or perhaps alarming) that this new work The Drag now exists on something as small as an USB stick, yet in its projection one can feel engulfed by the scale of the 1:1 projection.

In past works, the end product is usually the result of an intensive period of process. This was the case for Lifespan (2009), where we had to remove the cardboard and plastic cases of 96 tonnes of VHS cassettes, inside a deconsecrated chapel in Venice, next to a children’s childcare centre. Usually this kind of activity is monotonous or laborious, but the act itself was quite interesting and brought about a completely different element to the work. This usually remains a mystery to the audience, and that can be nice too, but now working in this medium of moving image opens up the work and captures process, which we are very excited about.

RA: Your work in People Like Us is described by the exhibition’s curator, Felicity Fenner as “celebrating humans’ love of the petrol-fuelled motor car while also heralding its demise at the end of the fossil fuel age”. How does this message reflect the concerns in your practice?

Many of our works deal with logistics and other processes. One of our ongoing interests is movement: our global economy and way of life is based upon the exploitation of inexpensive movement systems. Our age is literally propelled by fossil fuels. We think that our generation has gone beyond infant-like notions of infinite resources; on the surface The Drag plainly asks ‘What might happen once all the fossil fuel is gone?’ The response is a slightly silly drag race involving a lone operator, slowly taking apart the car and laboriously moving it, by his own strength, to the finish line. But the real question is: what actions are we actually taking, right now, as a society, to create new systems that will cope with changing resource availability?

Like Jack Kerouac’s On the Road, The Drag focuses on the individual and the false sense of freedom the main protagonist feels is propelled through the use of fossil fuel. It is a similar view taken by the work Par Avion (2012-2013) where we used the postal system to replace the engine of a Cessna 172. The plane was cut up to be able to be sent by post, all the components of the small aircraft were sent from Roma in Australia to San Francisco, USA. This process brought together two different systems of movement to reveal the relationship between individual will and collective endeavour. Furthermore, with the Tapestry of Disaster (2012) series, we used cross-stitching—a very slow and methodical process—to depict oil catastrophes, focusing upon the length of time it takes for us to expend fuel in contrast to the millions of years it has taken for it to be created.

RA: Do you always work in collaboration? And what aspects of the creative process do each of you bring to your collaborative practice?

Yes, we pretty much work exclusively on our collective practice. Of course we have different skill levels at different tasks—Claire comes from a design background and Sean’s education was originally more focused on the sciences. But in the end, our work often involves a long lead-up pre-production period and then a very focused, intense production phase, so basically everyone’s got to roll up their sleeves and pitch in.

RA: Where can we find out more about your work?

Our gallery in Sydney is Roslyn Oxley9, you can visit the gallery or go to the website.

Our gallery in San Francisco is Gallery Wendy Norris.

Monographs on our work can be found at Roslyn Oxley9 or the Museum of Contemporary Art, Sydney.

People Like Us is a National Exhibitions Touring Support Australia exhibition developed by UNSW Galleries and toured by Museums & Galleries of NSW.