Plane with propeller on the rear With a grand procession of historical planes and modern aircraft, the Australian Aviation Museum is an enjoyable reminder of man’s astonishing journey into the sky.

The collection is diverse with planes originating from Russia to those home-grown at Bankstown airport itself. There are pilot costumes, model airplanes, aircraft that have been used over long periods of time, several different war planes and a handful with mind-boggling alterations including one with a propeller at the rear!

‘Clancy Skybaby’, built in 1931, can be considered a prototype for modern-day aviation technology and showcases how quickly engineering advancements were made when you consider the type of plane the Wright brothers flew not long beforehand. Tour guide Mike explained that “they went from a kite with a small engine to planes like this in thirty years!”

Their individual personalities remained with me, as did the moving stories of the ANZAC’s who flew and fought in some of these planes.

Then there’s the Transavia PL-12 Airtruk. One of the most interesting planes on display, the Airtruk was the originally designed and used as a crop-duster and agricultural aircraft, until its outstanding ability to land on any sort of surface–no matter how rough the terrain–became known. The army responded and proceeded to use the plane in war time as air ambulance and military surveillance plane with a special remit for remote locations.

The museum also collects spare parts; aircraft skeletons, noses, cockpits and many different engines are displayed as objects in their own right which makes it the perfect place for those who like to see engines unpacked and in various states of repair.

Two planes born as brothers with sequential serial numbers are key exhibits. Employed initially as part of the RAAF Royal Australian Air Force, both “…were used in the war, then for charter work and are now retired” explained Mike.

These aeroplanes, like people, led interesting lives; they’d been to so many places and done a variety of work that it was easy to think of them as if they had lived. Their individual personalities remained with me, as did the moving stories of the ANZAC’s who flew and fought in some of these planes.

This Anzac Day break, why not wander down to the Australian Aviation Museum and take time to consider our aviation history?

The Australian Aviation Museum operates without funding, with half of the collection owned by the museum and half is on loan from enthusiasts and collectors. It’s run by a cohesive group of passionate volunteers. They’re the type of blokes who occasionally sneak a couple books from their extensive flight library for some personal night-time reading. 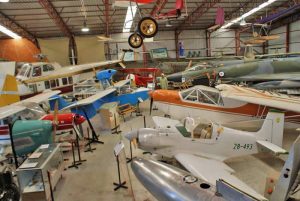