Life at the edge of reality

The opening epilogue from the Star Trek TV series ‘to boldly go where no man has gone before’ signifies not only the complexities of the split infinitive in proper grammar (or the past prerogative of subjugating women under the banner of the noun ‘man’) but also the twentieth century belief that true human accomplishment and advancement lay in the crossing of tangible boundaries.

This belief is explored by artist Adam Norton who has created work across media about topics as diverse as space travel, virtual warfare, nuclear weapons and post-apocalyptic survival. From converted survival bunkers, paintings of out-of-focus alien sightings, to anti-gravity simulators, Norton’s work is thick with the remnant mid-twentieth century sensibility when progress was defined by the speed of travel, the depths of the ocean, the increasing heights of our homes in the sky and by the boundaries of the known universe.

Norton’s most recent investigations in this line of inquiry are on show until 24 November in The Mars Project at Broken Hill Regional Art Gallery. The exhibition features selected works from the last ten years by Norton as well as the new video installation work The Mars Project–the result of the artist’s residency in Broken Hill in 2012.

“I like the can-do nature of science from this era ..."

The footage created as part of Norton’s time at Broken Hill, makes use of the area’s distinctive panoramic red desert landscape and its specific affinity with the terrain of Mars, the red planet. As Norton explains, “Das Marsprojeckt is the title of a sci-fi novel Wernher Von Braun wrote whilst a guest of the US government at Fort Bliss, Texas in 1949. In it he laid out his plans for Mars exploration.” In the artist’s explorations of this text, Norton dons the now trademark orange space suit, in which he has undergone many of his other performative investigations and traipses the surrounding location in Broken Hill immersing himself in the illusion of another world.

Whilst this image – of a man in high vis’ onesie earnestly exploring the desert for the experience of some other worldly encounter – may seem funny and surreal, this is not lost in the artist’s intentions. Norton says of early NASA activities, “I like the can-do nature of science from this era. I’ve been reading about the people that went to work at Area 51, as more and more information becomes unclassified. Some were just ordinary people with physical, hands-on experience – for instance, one guy left school, became a TV repairman, and then began working on spy planes.”

Previous PostLife on Mars
Next PostLetter to Newcastle City Council 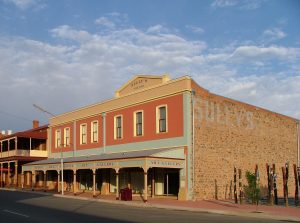