Another in our series of interviews with regional and public gallery directors. We recently grabbed a moment with Paul Brinkman, Director, Blue Mountains Cultural Centre at the Regional & Public Galleries Conference.

Paul Brinkman’s tertiary qualifications include a Bachelor of Secondary Education in Art and Design, a Graduate Diploma in Management (Arts) and a Masters of Management (Arts and Cultural Management) through the University of South Australia. Paul has served as a Museums Australia Queensland Committee member, Chair of QARGD, Deputy President of RPGNSW and is an alumni of Museum Australia’s Museum Leadership Program.

As Director and CEO of Cairns Regional Gallery from 2011 to 2014, Paul oversaw extensive renovations and capital works, grew the Collection to over double its previous value and implemented strategies to make it one of Australia’s most entrepreneurial public galleries. As Director of Blue Mountains Cultural Centre from 2014, Paul has managed the multi-million dollar construction of the facility and developed and implemented operational and management systems.

Paul has curated touring exhibitions to both national and International venues and has extensive experience in managing major visual arts projects such as the acclaimed exhibition Malu Minar: Art of the Torres Strait the first ever international touring exhibition of contemporary Torres Strait Art from a regional gallery, Picturing the Great Divide: Visions from Australia’s Blue Mountains the inaugural exhibition of the Blue Mountains City Art Gallery and the 2014 blockbuster exhibition Brett Whiteley: West of the Divide. 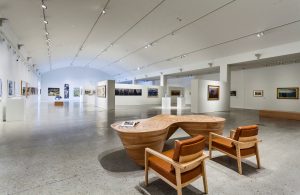