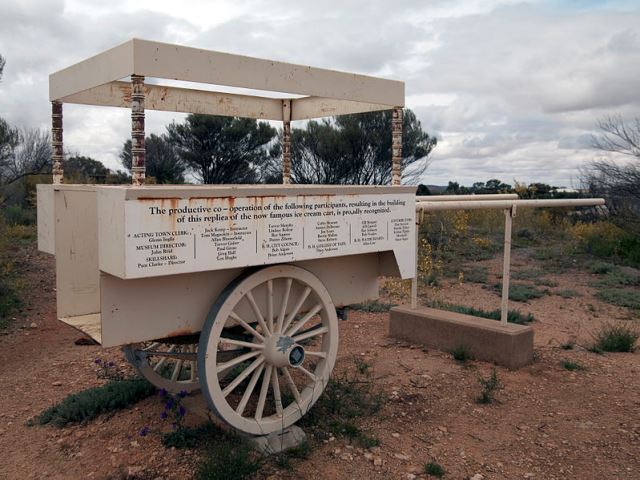 This stands as monument on the site of the massacre. White Rocks, Broken Hill. Photo: Wikipedia Commmons

There’s a curious incident that occurred on home soil in the early months of World War I.

Relevant to Anzac Day this is a story that goes to the very heart of Australia’s early race relations.

Imagine the scene. New Years Day, Broken Hill, 1915. It’s already hot outside, yet the 1200 townsfolk who have boarded the train at the Sulphide Street Station are excited and enthusiastic. They’re a bouyant bunch off to their annual Picnic Day. They sit laughing and chatting in the train–made up of 40 ore trucks, open to the elements and fitted with wooden benches for the day.

Bonnet ribbons fly in the breeze as the train trundles over the flat ground. Young men run or cycle alongside. Picnickers wave. Two men and an ice-cream van are seen beside the track. A flag is held aloft the cart and it carries a symbol often seen at the Afghan cameleer’s camp.

Shots ring out. Assuming the two men tending the cart are out rabbiting, the revellers take little notice as the sound dissipates. In that instant, 17-year-old Alma Cowie slumps down dead in her seat and young Alf Millard falls from his bike.

Assuming the two men tending the cart are out rabbiting, the revellers take little notice as shots ring out.

By the time the train had pulled over and the police alerted, Gool and Abdullah had fled. Taking shelter in a rocky outcrop, a 90-minute gun battle ensued. Members of the public, the military and police flocked to the scene. Bullets flew in both directions and a local resident chopping wood outside his house was inadvertently killed by stray gunfire.

Gool attempted surrender by tying a white rag tied to his rifle but the crowd, in no mood for caution, cut him down in a flurry of 16 bullets.

With both men well and truly dead, handwritten notes were recovered from the bodies. These connected Gool and Abdullah’s actions to the hostilities between the Ottoman and British Empires. Suggesting that Gool knew he would be killed, he declared in writing that he was a subject of the Ottoman Sultan and that, “I must kill you and give my life for my faith, Allāhu Akbar.”

Trouble did not stop there. Later in the day, police were called to prevent a mob from marching on the local Afghan camp and the German Club was set alight and burnt to the ground that same night. All the mine employees deemed as aliens were fired the following day and as race relations deteriorated all immigrants were driven from town.

Despite being a spectacular incident many questions remain.

Claims have been made that the letters were forgeries and the Turkish flag planted. Lines in the ground have been declared on both sides of the story–some say the Afghans refused to take responsibility for the bodies others blame harsh treatment of the Afghans by the locals as impetus for the incident.

Police records indicate that Abdullah had been convicted for the unsanitary slaughtering of sheep a few days prior to the shooting–apparently a repeat offence–and that he had borne the brunt of abuse for wearing his turban.

Can this incident accurately be interpreted as the ‘only enemy attack on Australian soil during World War I’ or is it to be better understood as another chapter in Australia’s varied and sometimes difficult migrant history?

The Silverton Gaol and Historical Museum in Silverton tells this story in their display.

The Justice and Police Museum, Sydney is currently caring for the flag, the copy of the Koran, the bandolier and weaponry associated with the incident.

Listen to the story on ABC Radio

Read the SMH article Afghans, cameleers and the massacre of Broken Hill 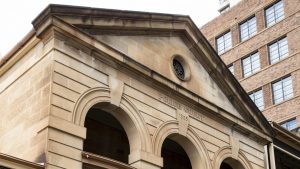 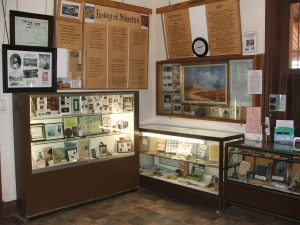