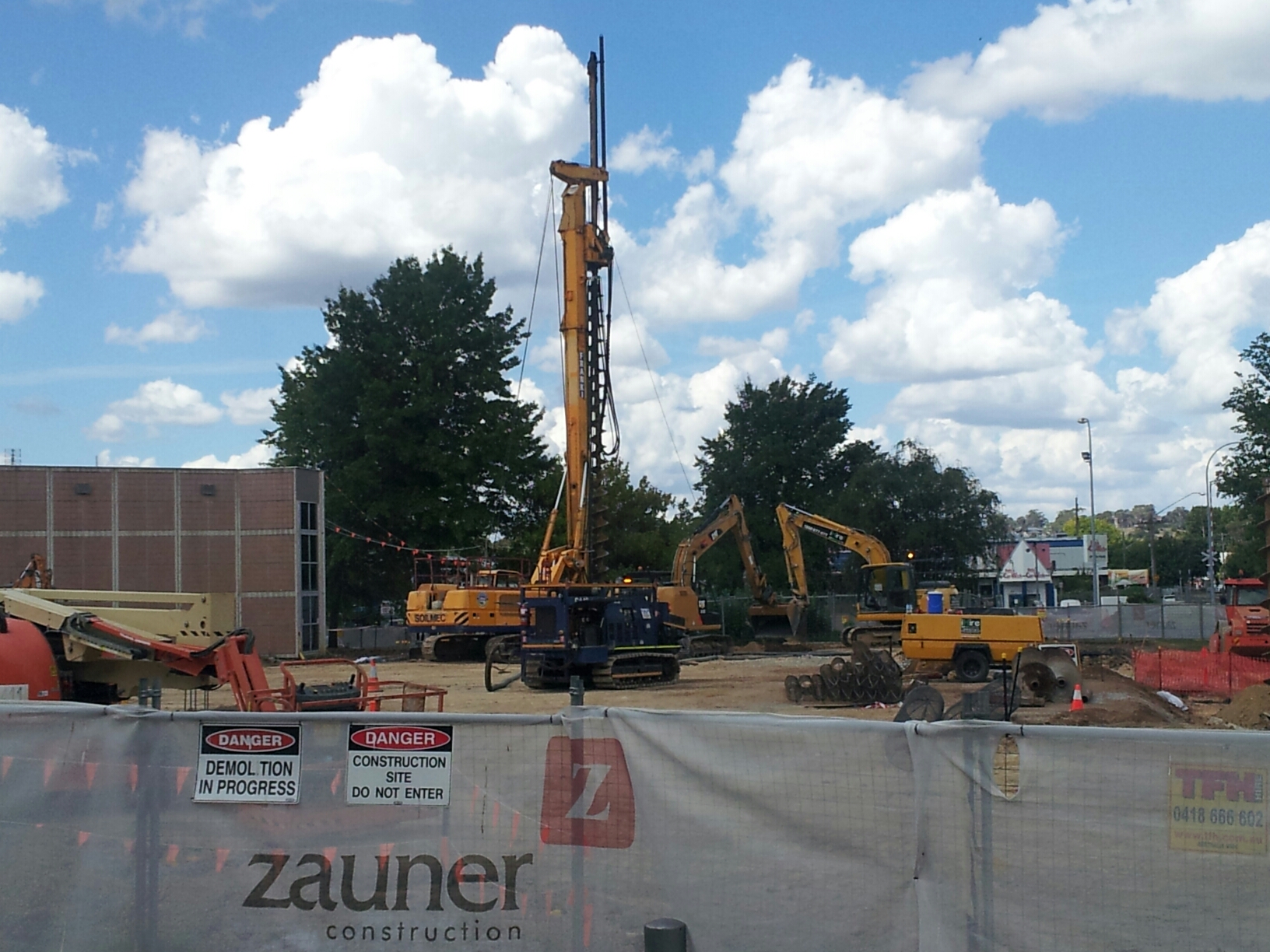 A sloping grass roof is a key feature of the concept drawings for the Regional Museum. It provides new entrances to the award-winning Library-Gallery building. Image: Crone Architects. 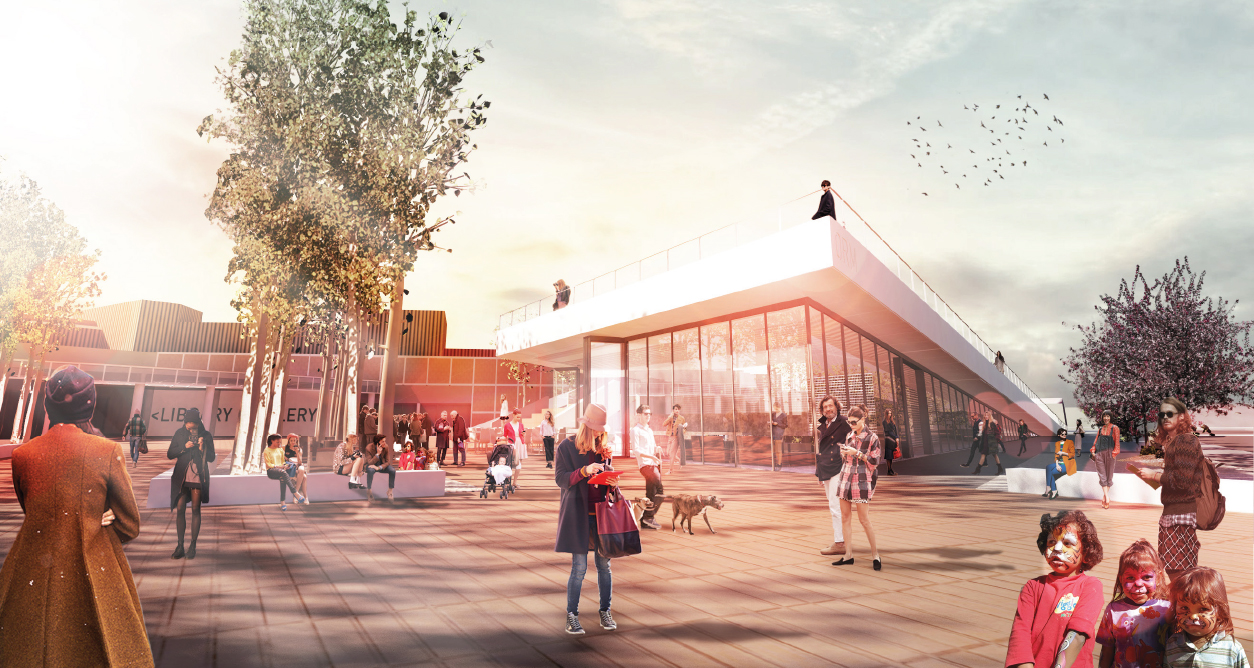 Research found most people approach the Library-Gallery precinct from the Civic Centre car park, rather than from Byng St. The proposed museum frames a large open square. Image: Crone Architects.

Currently the planned Orange Regional Museum is a construction site: the construction company has demolished the existing visitor centre; the site in front of the library and gallery is being cleared, and the holes prepared for large footings and pylons.

Council engaged a Museum Advisor in 2001 who instigated a plan to develop a museum in Orange. The journey to construction began in 2006, when Orange Council resolved to develop the new facility, though it wasn’t until the project got an injection of $4 million from the Federal Government in 2013 that plans could turn into reality.

The building will be an iconic feature of the city and region. It features an integrated roofscape connecting a fully accessible lawn; transforming the museum hill into public green space, formal event space, and perfectly positioning the museum to tell the story of Orange and the region.

The 1000 square metre area occupies one corner of the site, which encompasses the civic center and the current award winning gallery/ library and civic theatre. The main museum space is split into a semi-permanent exhibition space and a temporary space for travelling exhibitions. Internal glass facades help link the museum, entry lobby and café to the outdoor plaza.

The local Aboriginal community are keen to develop a partnership to tell their story through the museum and Orange Council is working with them to develop a strategy and to collect oral history interviews from local Elders. The NSW Government has given $45,000 from their Arts and Cultural Development Program for research and interpretation of Aboriginal and migration history.

Mining and migration are integral to Central West’s story. Council has done significant research into the region’s migrant history through an earlier project called Half a World Away, as well as exploring the Cornish history of the region, and they are currently developing a project about Chinese migration to the region. Exhibition designers, Freeman Ryan have been engaged to develop a concept for spaces. There’ll be a call-out to the public seeking contributions of significant objects, archives and photographs to enrich these displays.

The Council’s Sustainable Collections Program operating over the last eight years has resulted in many fine programs including Villages of the Heart, a two year project developed to explore and promote the history of the smaller towns of the Orange region. Currently focusing on new displays about food and produce distinctive to each place, Villages is working with Sydney Living Museums and in particular, Jacqui Newling of Cook and Curator fame.

The building will be an iconic feature of the city and region. It features an integrated roofscape connecting a fully accessible lawn; transforming the museum hill into public green space, formal event space, and perfectly positioning the museum to tell the story of Orange and the region.

The museum is due for completion by the end of the year and Alison Russell, Museum and Heritage Coordinator for Orange Council, is unequivocal about what the development will mean for the area:

“The museum in the civic precinct has to be a win-win for the city and the region, the building will not only house the museum, it will house the visitor information  centre and cafe. Being an iconic building will help to create a culture precinct for Orange. The community will be able to use the grassed area for festivals, displaying sculptures, or movie nights.”

The construction of the bricks and mortar entity is only part of the story. The community sees the museum as an opportunity to share the region’s rich history with locals and tourists alike. As Alison Russell goes on to explain, “the museum will operate as a hub for the 12 or so local museums in the area providing support, training, educational programs for schools in the district; and encouraging visitors to explore more widely the region.”

Before the museum doors are thrown open there’s still plenty of work to be done: exhibitions to develop, research to be completed, and numerous programs sourcing objects and stories. “It takes time to develop museum exhibitions so it will be a big year ahead”, says Alison.

The Orange Regional Museum and Cultural Square was funded jointly by the Federal Government which provided $4 million, Orange City Council will match this with $2 million, the State Government has provided the land, valued at $1 million and  it’s planned another $1 million will be provided through community fundraising.