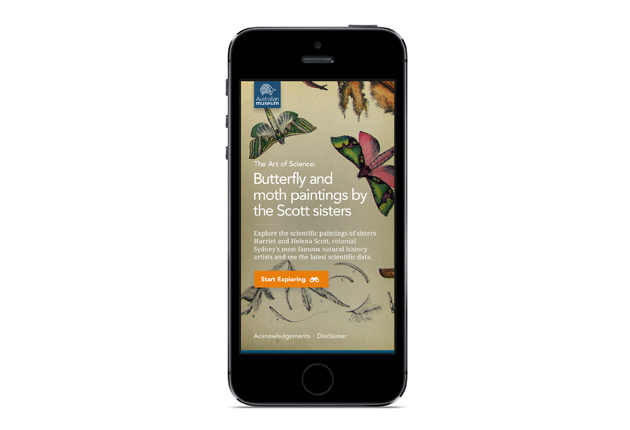 New app! The Art of Science: butterfly and moth paintings

Are you a lover of butterflies? Then you’ll fall love this great little app—The Art of Science: butterfly and moth paintings.

Launched by the Australian Museum and just in time for International Women’s Day The Art of Science is a ‘must have’ on your phone or tablet.

Showcasing the 150-year-old paintings by sisters Harriet and Helena Scott, the app is a celebration of the life and art of the Scott sisters. It allows close-up and detailed viewing of their exquisite watercolour paintings of your favourite butterfly or moth. It links you with up-to-date information about the current scientific data on each of the specimens via entries in the Atlas of Living Australia, part of the Global biodiversity Information Facility.

The ‘About’ section of the app gives a detailed biography of Harriet and Helena who led interesting and unusual, though at times, difficult lives for women in the 19th century.

They continued to produce art for scientific publication throughout their lives, despite being hard hit by financial difficulties in a society that largely frowned upon working women.

Born in the 1830s and working from their home on Ash Island in the Hunter River near Newcastle, Harriet and Helena were tutored by their entomologist father, Alexander Walker Scott. By the 1850s Scott and his daughters had collected, catalogued, researched, and painstakingly illustrated over 100 species of butterflies and moths. Australian Lepidoptera and Their Transformations containing 25 of these illustrations and detailed research was published in 1864.

Harriet and Helena were awarded the rare privilege of honorary membership of the Entomological Society of NSW and received numerous requests for commissions. They continued to produce art for scientific publication throughout their lives, despite being hard hit by financial difficulties in a society that largely frowned upon working women.

The original 100 Lepidoptera works were eagerly purchased by the Australian Museum in 1884, and are an important part of the entomology collection in the Museum forming the basis of the new app.

So let the Scott sisters’ beautiful butterflies take flight on your phone — download the app today. Free from the iTunes store.

The Art of Science: butterfly and moth paintings app is an Australian Museum project who worked in collaboration with developers Beaconmaker under funds provided through the NSW Government apps4nsw initiative.

A biography of the Scott sisters – Australian Museum