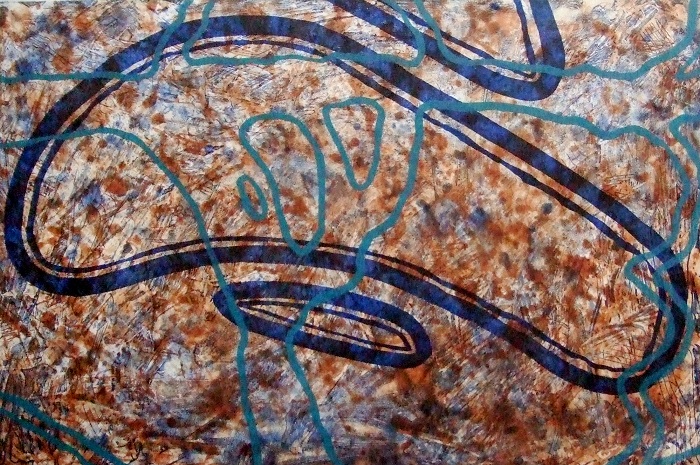 This week’s At Home artist is rising star, Frances Belle Parker, a Yaegl woman who lives and works in Maclean. M&G had the pleasure of talking to her and in particular about the repeated use of a particular kidney bean shaped motif featuring in much of her work.

M&G: Thanks for talking with us today Frances. Can we start by getting a bit of background about you and your work?

Frances Belle Parker:  Yeah sure. I grew up in Maclean hearing a lot about my Country from my mum and our extended family. I was connected into the history about what had happened to our people as the result of colonial attitudes and the development of the north coast and in particular about the way our people were ‘contained’ and moved to Ulgundahi Island in the Clarence River. So when I finished my Honours in Visual Arts I knew what I was going to make art about.

M&G: Can you tell us more about the history of your people?

Frances Belle Parker: During the early 1900s around twelve Yaegl families were rounded up and forcibly moved to the island. It had always been our land but suddenly it became our only land and a place of confinement. In 1961 the island flooded, forcing all the families off the island for good. It was recently handed back to the Yaegl people and is managed by the Land Council and preserved through its NSW Heritage listing. My mum grew up on the island and many of her stories originate from when she was confined there. The island is a really significant place for us, I was married there.

M&G: So does your work aim to document that history?

Frances Belle Parker: My work is about several things – it’s about the importance of telling our history in our own way to our own people; I have a young daughter and I want her to know about her heritage and all it encompasses. But my work is also about the process of pulling back, of reclaiming our land so it is seen by others as Aboriginal land. That’s where the island comes into it. So much of our past is tied to Ulgundahi Island – it was natural for me that it became an icon in my work.

M&G: So that friendly little kidney bean shape in your work is the outline of Ulgundahi Island?

Frances Belle Parker: Yes – I use it as a symbol – of ownership, and to mark the spot where this history occurred. In drawing it and repeating it again and again I like to think I am reclaiming it and bringing it back into our day to day lives.

M&G: Your printmaking work in particular conjures the idea of mapping – you use a kind of fluid topographical line to define the island. Is that an intentional reference?

Frances Belle Parker: Yes, it is. Our people knew where our land was and understood its boundaries; we didn’t need to put it on paper but in ‘mapping’ the island I am creating a sense of ownership, using the same tools that were used against us to take our land away. Drawing lines around us; separating us, segregating us from our land and from other Aboriginal people, our past neighbours.

My work is also about the process of pulling back, of reclaiming our land so it is seen by others as Aboriginal land.

M&G: You speak about the stories told by your mother. Is there a feminist perspective in your work?

Frances Belle Parker: You may have noticed that the island also takes the shape of an ovary.

M&G: I’m glad you said that! We certainly had noticed but thought the ‘kidney bean’ descriptor might be safer in case it was our imagination!

Frances Belle Parker: No, lots of people have said that it looks like an ovary and it’s not a bad association–Maclean has a strong matriarchy associated with much of its history. I like to think of Ulgundahi Island as a heart of everything. In some of my work the river is also there. From the air, you can see the river as the veins, the lifeblood for our land and the island is there right in the centre of it, beating away, pumping life around.

M&G: We saw the site specific work you did for the Telstra Indigenous Art Prize in 2008 in Djon Mundine’s catalogue for A Personal History of Aboriginal Art in the Premier State and recognised the island immediately. Can you tell us about why you chose to use wooden pegs in that piece?

Frances Belle Parker: I needed an everyday object, something that was cheap – I was a student when I created that work, when I was in Bunnings I saw these packets of wooden pegs. I had to buy them progressively until I had 10000 of them! Creating that work was a personal journey for me – there was a ritual involved in writing the words ‘Ulgundahi Island’ in black pen on each side of each peg. People offered to help me as they could see I was labouring away with the job but I felt I had to do them all myself. I dipped each one into a bucket of plaster which was what happened to our people and our history when white people came here. We were ‘whitewashed’. I’d seen photographs of our people who worked as servants and maids dressed in this stark white or grey clothing and it struck me that the pegs were like each of them. The plaster was designed to peel and flake off, gradually disclosing parts of the words I had written on them. I arranged them in the shape of the island to bring everyone home again.

M&G: Some of the pegs are broken or pulled apart. What is the significance of that?

Frances Belle Parker: I guess it’s a metaphor for what happened to our people – the process of taking land away from our mob was really destructive, not just to our traditional way of life but to the connections between family. People moved away or were taken away and lost the knowledge of who they were related to. My mother found her half-brother Vince at an Elders Conference in Wollongong in 1999 after a 50 year search – so the broken pegs are like him, they represent what was dislocated and broken. Finding him was like a home coming so it was important to indicate the threads of these stories in the work.

M&G: Thanks Frances for talking with us today. It was a real pleasure to hear about the history behind your work and how you are using it to right many wrongs. We hope to see more of your work in the future.

Editor’s note: During the interview Frances indicated the importance of living and working on her Home Country. Doing so carries an authority or permission to discuss and comment on the history of her people. This is a sentiment echoed by several other Aboriginal artists we have spoken to. 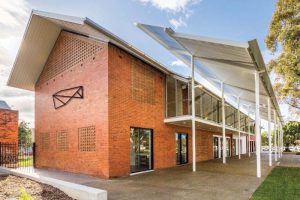 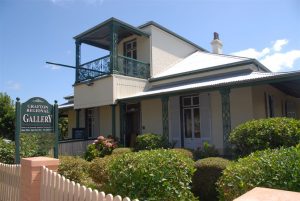