First Draft closes three final exhibitions at their Chalmers Street galleries on 14 December. This marks the last shows they will be holding at this space after almost 20 years of supporting and presenting the work of hundreds of emerging Australian and international artists in Sydney.

Andrew Frost has written a strong support piece in the Guardian as to why artist run spaces with the longevity of Firstdraft are so important and so rare.  As he points out, the ARI is one of the oldest in the country, opening its doors in a converted warehouse in Chippendale in 1986 with seed funding from the Australia Council.

“Firstdraft, founded by artists including Tess Horwitz, Paul Saint, Narelle Jubelin and Roger Crawford, arrived at a time when there were few opportunities to exhibit in alternative and non-commercial spaces.”

Firstdraft will reopen in 2014 in a brand new location. The directors will not disclose the new location so when we hear something you’ll be the first to know.

Firstdraft invites you to join them for the final event in their Chalmers Street space, on Wednesday the 18th of December. Visit their website to RSVP. 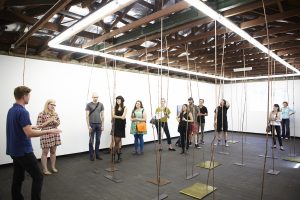