The Bunker Cartoon Gallery is Australia’s only cartoon gallery, its name a nod to the disused World War II bunker which the gallery occupies.

As well as the varied and changing exhibition schedule, the bunker itself is a fascinating place to visit.

The gallery has an extensive collection of paper works; a selection of their horse-related cartoons was on display during M&G’s recent visit. On show in the main exhibition room were works by Funnybone cartoonist Ed McMahon which had many visitors giggling at the cheeky jokes. The foyer was the perfect location to sample a wonderful photographic display showcasing the work of Geoffrey Lee, fashion photographer extraordinaire and Coffs Harbour resident.

As well as the varied and changing exhibition schedule, the bunker itself is a fascinating place to visit. Built in 1943 by the RAAF to house the Operations Room for No. 12 Operational Base Unit RAAF, the bunker survived forty years of post war neglect before restoration and eventual listing as a heritage building.

Several other bunkers in NSW and in Queensland were built to the same plan – typically, a long barrel-roofed room at or below ground level, constructed to survive the heaviest of direct bombings. Entries, ventilation shafts and tunnel entry points are found at each end of the bunkers often being the only part of the building to protrude above ground level.

The internal space of the Bunker Gallery is dramatic, beautifully restored and powerfully evocative of the working lives of the men and women stationed here during the last years of the war. Australia’s former Prime Minister, Gough Whitlam was one of those.

The Bunker Cartoon Gallery resonates with the irreverent humour of its collection and the atmospheric charisma of the building itself.  Well worth a visit. 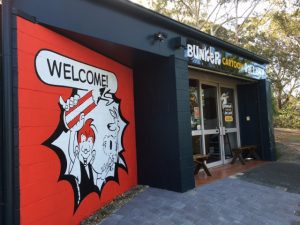