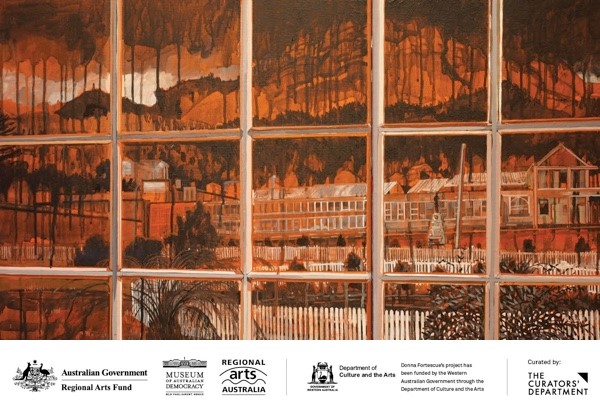 In his review of Right Here Right Now published in the Sydney Morning Herald (16/01/16)—an exhibition conceived as a celebration of regional, rural and remote visual arts—John McDonald offers criticism of regional gallery management structures adopted by some local councils in NSW.

While there is widespread agreement with the view he expresses, McDonald neglects to mention that many councils recognise and invest in qualified gallery staff and valued cultural leadership. Albury, Bathurst, Bega, Tweed, Lismore and Campbelltown councils, to name only a few, represent communities that are benefiting way beyond those criticised.

You can read the article on his blog or read the pertinent part in the excerpt below.

“It probably started with Port Macquarie building a massive new arts centre, then deciding to save money by abolishing the position of gallery director. The catastrophe was advanced in Newcastle, during the reign of Mayor Jeff McCloy, a local property developer, who removed a very successful and popular gallery director in Ron Ramsey. The Mayor would meet his own Waterloo, following ICAC revelations that he had been handing money to NSW Members of Parliament, but the damage has yet to be repaired.

Now the blight has settled on Coffs Harbour where Leigh Summers has made the local gallery one of the most active venues in the state. She has attracted substantial private sponsorship around the Eutick Memorial Still Life Award (EMSLA), which I’ve been flying up to judge on an annual basis. She has also used EMSLA as the occasion for a festival that has featured musicians of the calibre of Elena Kats Chernin and Simon Tedeschi.

Summers’s reward has been to see her job taken away by a council that simply doesn’t understand what they are doing. The plan is to install a general manager of cultural services, sack gallery staff and give Summers the new role of “curator” – a title that will entail a substantial pay cut, in the unlikely event she decides to stay on for the next two years.

On Saturday more than 80 aggrieved locals attended a meeting where a Council representative with the rather wonderful name of Enzo Arcadia fended questions. I’ve read a partial transcript, which only confirms that none of the questions was adequately answered, and no plausible explanations advanced. It wasn’t Mr. Arcadia’s fault – he was merely the messenger.

The real problem is the astonishing ignorance of local councils to appreciate the benefits of a well-run regional gallery, which works not only as a tourist attraction but a powerful source of community-building and social cohesion. The gallery provides a reason for a substantial number of people to visit Coffs Harbour, stay at local hotels and eat at local restaurants. It gives local artists a venue to show their work, and to see work by artists from all over Australia. In Coffs Harbour it has fostered a large volunteer group, who are staunchly behind the current director.

The new plan is to put a “team leader” in charge of the gallery, library and museum, while Summers is expected to do all the things she’s been doing, as an underling. She would also have to pick up the tasks of the education officer and assistant, whose positions have been abolished.

The reasons for this radical manoeuvre are “financial and staff re-structuring” – which are not reasons at all but the typical smokescreen used for short-sighted policies the world over. It is another example of rampant managerialism which destroys proven success in the name of imaginary efficiencies. The usual outcome is that such processes cost more than they save, and kill off a valuable asset. Typically there was no community consultation before these momentous decisions were made.

Newcastle was cited by Mr. Arcadia as an example of such restructuring in action. But by dumping Ron Ramsey, and installing a general manager to take care of the art gallery, museum and theatre, Newcastle has disappeared off the cultural map. The greatest regional collection in the state now resides in a gallery that is a shadow of its former self – and this is the fate that awaits Coffs Harbour.

Nobody questions that a company needs a CEO, and a community needs a mayor, but for some reason the role of a gallery director seems superfluous to councillors who imagine their own lack of interest in art is shared by the voters. They should not be so complacent. It is the great virtue of a democracy that officers who fail their constituents may be turfed out at the next election.

Rather than write a dissertation on the role of regional galleries and the work of directors, I’ll make one simple suggestion to any community faced with such destructive and insensitive policies: take political action against the perpetrators. Organise and campaign, remove the wreckers from town hall. Show them how important it is that the community be consulted when facilities are being “re-structured” in ways that can only end in disaster.”