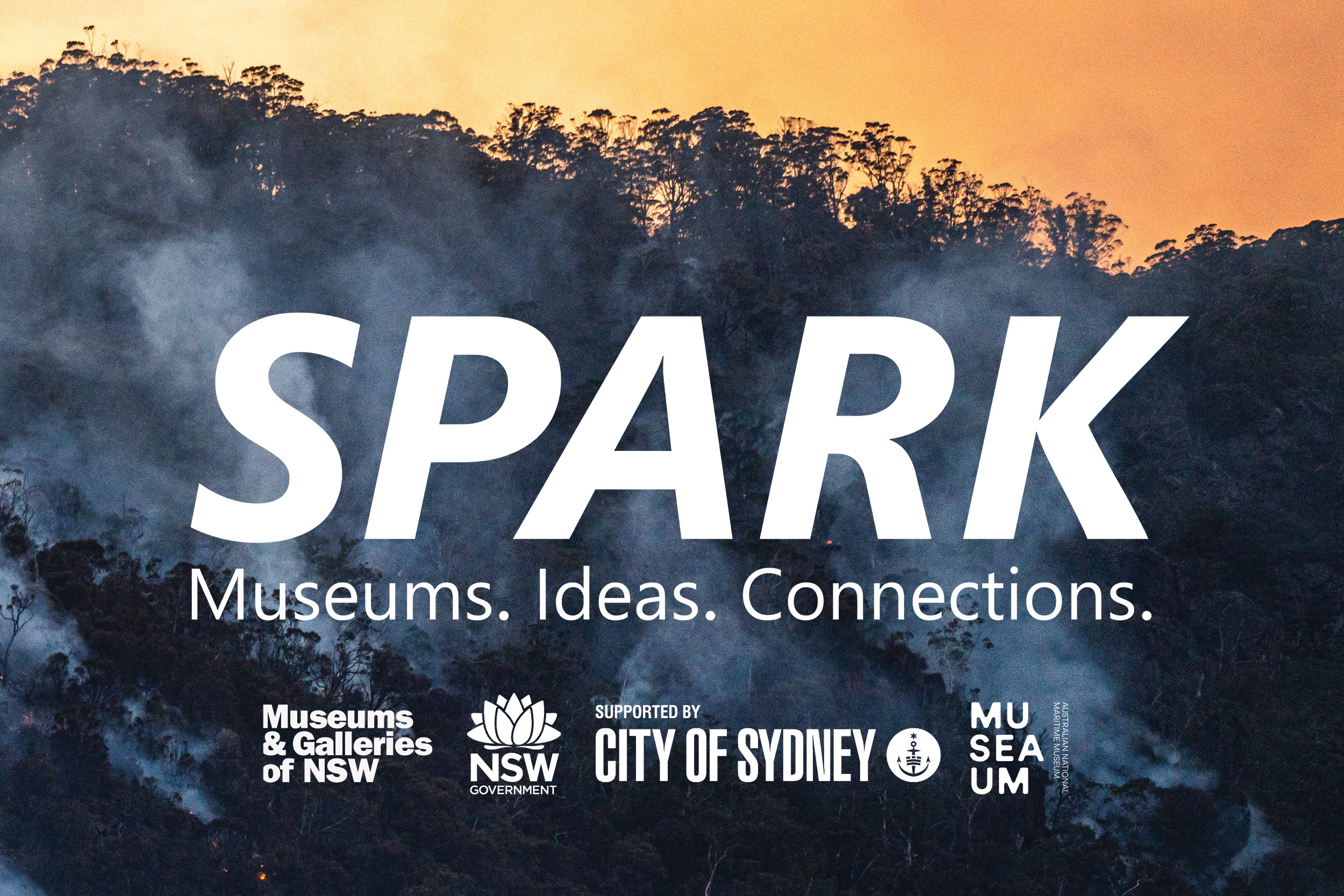 This edition of SPARK featured a curated evening of provocative talks tackling the theme Taking up the Challenge: Culture in the face of climate change on 19 July 2022 at the Australian National Maritime Museum.

Whether it be as knowledge holders, educational organisations, voices for the community, role models or rallying hubs in times of trauma, museums, galleries and Aboriginal keeping places all have a role to play as we face ever greater environmental challenges and natural disasters.

SPARK 2022 is made possible through the City of Sydney Knowledge Exchange Sponsorship grants.

The evening featured the NSW premier of a recent film by artist, Adam Sébire.

anthropoScene IV : Adrift (∆Asea-ice) (2019)
The calculus of one’s own contribution to a warming climate.

Citizens of developed countries are increasingly aware of correlations between our lifestyles and the climate crisis: witness the phenomenon of flygskam or “flying shame”. Borrowing a groundbreaking scientific formula* the filmmaker-artist calculates and saws off the exact amount of Arctic sea-ice (15.69m²) that will be destroyed by his carbon emissions flying economy return, from Sydney to Greenland, to film it (5.23 tonnes of CO₂e).

Adrift (∆Asea-ice) visualises and mythologises the consequences of a Western way of life. It touches upon disconnects — of cause from effect; of emissions here & now from melting there & then — that underly our psychological responses to global warming. Disconnects that have perhaps kept the problem comfortably abstract for us — until now…

Reina Takeuchi – Sustainable Curating & Carbon Neutrality
Reina is an Australian-Japanese artist-researcher, curator and dance maker interested in interdisciplinary collaboration. Influenced by her experiences living peripatetically across East and Southeast Asia during her youth, Takeuchi uses an auto-ethnographic approach to her art/performance processes. Her practice spans across visual arts, choreography, curatorial projects, written publications and creative facilitation. Reina is the curatorial Program Producer and manager of 4A Centre for Contemporary Asian Art’s carbon neutral program. 4A is certified as a Climate Active carbon neutral organisation, set by the Australian Government Department of Environment and Energy. As a founding member of Climate Active, 4A is only the second arts organisation in NSW to be certified, along with the Sydney Opera House.

Cay-Leigh Bartnicke – Valerie Taylor Collection
Cay-Leigh Bartnicke is an early career Assistant Curator of Special Projects. She has a Bachelor of Marine Science and over a decade of art training that she brings together in her work focusing on marine science communication and sustainability

Sabrina Roesner – Places for the Future: Environmental Sustainability in Museums and Galleries
Sabrina is the Artistic Programs Manager at the Blue Mountains Cultural Centre and recipient of the 2021 Alan Sisley Memorial Fellowship. She is will present on her recent research and report into best practice approaches to embedding environmental sustainability principles into the operations and programming of the NSW cultural sector.

Lucille Martin – Right Fire
Lucille is a contemporary Australian artist with an established professional career in multi-disciplinary work which includes significant community development, higher education, pedagogy and policy advocacy. Lucille’s application of iPhone-capture acts as an extension of the body in the merging of performative and documentary practices she captures while walking the Australian landscape. Her recent work, Right Fire, was created during an artist in residence program at Bundanon Trust in 2018, where she was welcomed by the local custodians and invited to observe fire initiatives and ‘good fire’ being introduced into the landscape.

SPARK 2022 is made possible through the City of Sydney Knowledge Exchange Sponsorship grants.