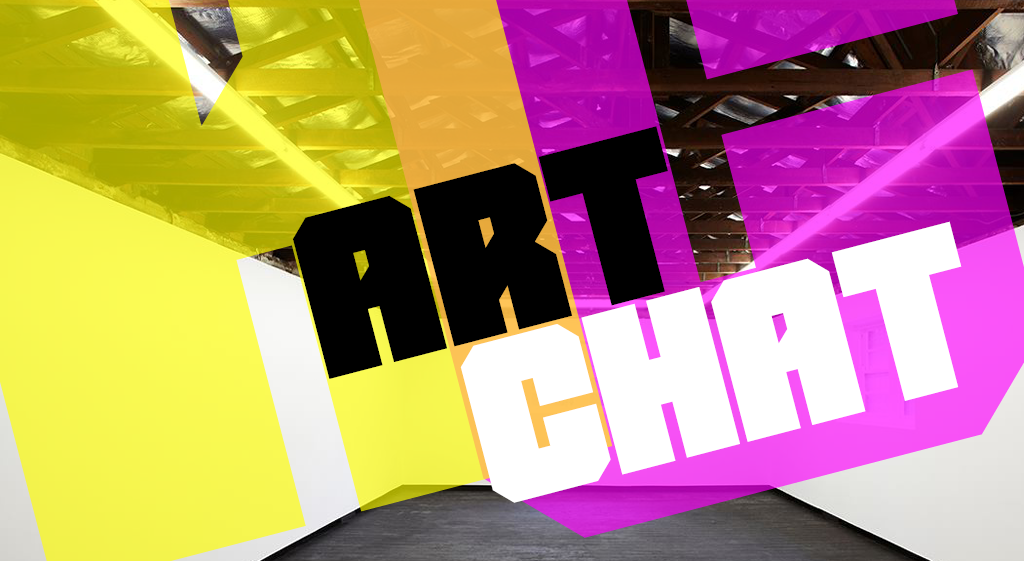 Join us for a casual evening of cheese, wine and ideas at our annual ArtChat event.

Held this year at one of Sydney most interesting new galleries, Cement Fondu in Paddington, ArtChat will explore creative projects and practices in a fast-paced, invigorating and sometimes humorous format.

Featuring an exciting line up of curators and artists who work with ideas and practices that often fall outside traditional white space gallery models, challenging us to rethink how we respond to, engage with and think about art.

Take in the exhibition, Between Suns, before it closes and hear from some of today’s most exciting creative thinkers.

Presented by Museums & Galleries of NSW, this free event promises to be a fun night of artistic exploration, ideas and networking.

RSVP is essential for catering purposes.

Consuelo Cavaniglia is an interdisciplinary artist whose work focuses on how we see and understand space. Taking its cues from film, photography and architecture the work employs technically simple visual effects to distort perception and unsettle the relationship between viewer and space.

She has an MFA from Sydney College of the Arts and is a lecturer in the Faculty of Architecture, Design and Planning at the University of Sydney. She was selected in 2015 to present at Cities in a Climate of Change, the International Award for Public Art Conference in Auckland, and has been on the board of artist-run spaces Firstdraft and 55 Sydenham Road. Independent curatorial projects have consistently flanked her practice – she has developed projects in galleries, museums and public spaces.

Amrita Hepi is an award winning first nations choreographer and dancer from Bundjulung (Aus) and Ngapuhi (NZ) territories. Her mission as an artist is to push the barriers of intersectionality and make work that garners multiple access points through allegories. An artist with a broad following and reach her work has taken various forms (film, performance, sculpture, text, lecture, paticipatory installation) but always begins from working with the body as a point of archive, memory and resistance.

She is a member of the Western Australian Dance Company OCHRES and has worked with Victoria Chiu, Marrugeku, Melanie Lane & Amos Gerbrahnt, Bhenji Ra and Force Majeure.  In 2018 she was the recipient of the people’s choice award for the Keir Choreographic award and was named one of Forbes Asia’s 30 under 30. Amrita has also worked in various commercial capacities and has been commissioned by ASOS global to create and choreograph film works and has been featured globally in Vouge USA, TeenVouge USA, Instyle, Harpers Bazar and PAPER US.

Jo Holder is a curator and writer who works with contemporary artists, scholars and activists both inside and outside gallery contexts, in communities and in public spaces. She is director of The Cross Art Projects in Sydney. She is co-convenor of the independent research cluster Contemporary Art and Feminism (with Jacqueline Millner and Catriona Moore) and produced the year-long Future Feminist Archive (2015–16).

She has held professional roles in the arts for over four decades: as director of SH Ervin Gallery, National Trust, Sydney (1997–1999), co-director, Mori Gallery, Sydney (1984–92) and teaching and writing on the visual arts. As a former Australian Financial Review art critic, she has published numerous essays and articles and edited many visual arts publications.

Dr Caleb Kelly is an academic, event director and curator working in the area of the sound arts. He is the author of books Gallery Sound (2017) and Cracked Media (2009).

Caleb co-curated a large exhibition entitled Sound Full: Sound in Contemporary Australian and New Zealand Art, at the Dunedin Public Art Gallery and the City Gallery in Wellington, NZ in 2013/2014 and recently curated Material Sound for MAMA in Albury. Caleb is currently working on an iteration of Material Sound for the Black Mountain College Museum + Arts Center in Asheville, North Carolina.

He is a senior lecturer at UNSW Art & Design.

Emily Parsons-Lord’s artworks vanish into thin air. Creating art that exists at the fringes of natural sciences, politics, and magic, she transforms research into poetry to create artworks that can be smelt and inhaled or melt before your eyes.

Parsons-Lord is a Sydney-based cross-disciplinary contemporary artist whose work is informed by research and critical dialogue with sciences, natural history, and politics. Her work often attempts to reconcile lofty vast infinities of our place in time and space, and slippages in to the political realities of being a human today.

Recent work includes a cascading waterfall of plant distress pheromone for Liveworks Festival, giving hand massages with pig mating pheromone at Wellington St Projects, recreating the air from past eras in Earth’s evolution at both Proximity Festival in Perth, 2014 and Underbelly Arts, 2015 (supported by both the Australia Council & Arts NSW), recreating starlight in coloured smoke for Proximity Festival 2015, and Electrofringe 2015, multichannel video at Firstdraft, 2015, the Bristol Biennial – In Other Worlds, 2016 (supported by the Australia Council), Primavera 2016 (supported by NAVA), Liveworks 2017, and the NSW Visual Arts Fellowship for Emerging Artists, 2017.

Grace Partridge is an award winning emerging curator and creative producer, working in the research, creation and facilitation of art and culture, across a multiplicity of fields.

As the Founder and Artistic Director of Antidote—a platform at the intersection of art and social change—Grace strives to bring together the best creative minds in conversation through artist features and curated programs. Each story is brought to life through a series of exhibitions, both in pop-up spaces and major visual art institutions alike. With an emphasis on featuring emerging to established contemporary artists, Antidote provides an alternative frame of reference for significant world issues.

She has studied at the Interlochen Centre for the Arts in Michigan, the London Academy of Music and Dramatic Arts (LAMDA), completed two degrees (BA and BMus) at UNSW and is currently undertaking a Masters of Art Curating at the University of Sydney.

Shan Turner-Carroll is an Australian artist of Burmese descent. Shan’s practice responds to both site and situation specificity, and integrates mediums including photography, sculpture, performance and film.

Shan has exhibited throughout Australia, as well as in New York, New Zealand, Hong Kong and Myanmar. His work is in both public and private collections.

Shan was a finalist in the 2017 NSW Visual Arts Emerging Fellowship, Artspace Sydney and the National Tertiary Art Prize and went on to win the Doctor Harold Schenberg Scholarship, Perth Institute of Contemporary Art. In 2016 Shan was curated into The Auckland Festival of Photography as a featured international artist and a new commission for Blacktown Arts Centre, Sydney and The Lock Up, Newcastle. Shan’s work will feature in the upcoming exhibition 1818 at Newcastle Art Gallery.